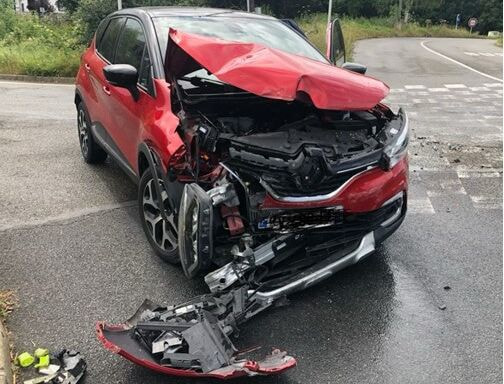 The family vehicle, a Renault Captur, after crashing with the bus. The 2 vehicles drove at low speed and yet the damage is extensive.

This is the story of when Gwendoline’s husband and their 5 year old son were in a collision with a bus. The son sat in an Axkid ONE and was saved from both physical and mental harm, according to the mother. We’ve had an important talk with Gwendoline.

Gwendoline’s husband and son were on their way home from the swimming pool when the accident occurred. Whilst approaching a roundabout with no traffic present, her husband heard a bus horn, but it was too late to brake. The collision caused the bus to impact his front wheel and tear away the front of the car. The bus had priority, but Gwendoline’s husband didn’t see it because he missed a traffic light. Fortunately, there was no high-speed collision since the bus drove approx. 50 km/ h, and the car in approx. 20 km/h.

“My husband got away with back and shoulder pain, and he was in shock afterwards. It’s frightening seeing a bus arrive on you. Our son didn’t feel anything, but he has a vague memory of the loud horn. He was just sad about the car, feeling neither physical nor mental pain afterwards, thanks to his rear-facing car seat.”

Gwendoline’s son had a session with the osteopath who did not detect anything as trauma, which her husband experienced. Her son (20kg and 110cm) usually travels in the Axkid Minikid but this time he was in his sister’s Axkid One, because the family had lent the Minikid to friends. Gwendoline testifies:

“Our son clearly didn’t feel anything of the crash, luckily he got away with no physical harms. It wasn’t until he got out of the car, he realised what happened, after seeing the damage done. But it’s not only the possible physical harms that bothered me, but also the psychological ones. As a mother, it is relieving my son didn’t see when the bus hit their car and thus avoided a psychological trauma as an effect of the crash.”

Most accidents happen on short daily journeys, and as Gwendoline says, accidents do not only happen to others. She pinpoints the fact that a rear-facing car seat is a safety system which is up to 5 times safer than forward-facing. Gwendoline often hears that a car seat is expensive, but as she said:

“The safety of our children is priceless after all.”

We thank Gwendoline for her testimony and are relieved that everyone is in good shape. Thank you for trusting us with the safety of your children.

Axkid Minikid has been on the market for almost 10 years. It is a loved product by both children and parents due to the high level of safety…
Read more
Summer Campaign – £50 off Move Tar | Axkid Car Fit Guarantee »